For years, your options to interact with a Facebook ad have been static. View, click, like, comment, or share were all viewers could do, and those metrics defined your success or failure (and probably next quarter’s budget). By and large, viewers have an unconscious budget for interaction, which is spent on the options that render the most gratification. It should not be a surprise to discover that Facebook knows this very well. Thus, this week, they’ve rolled out a new set of playful, interactive ad types. 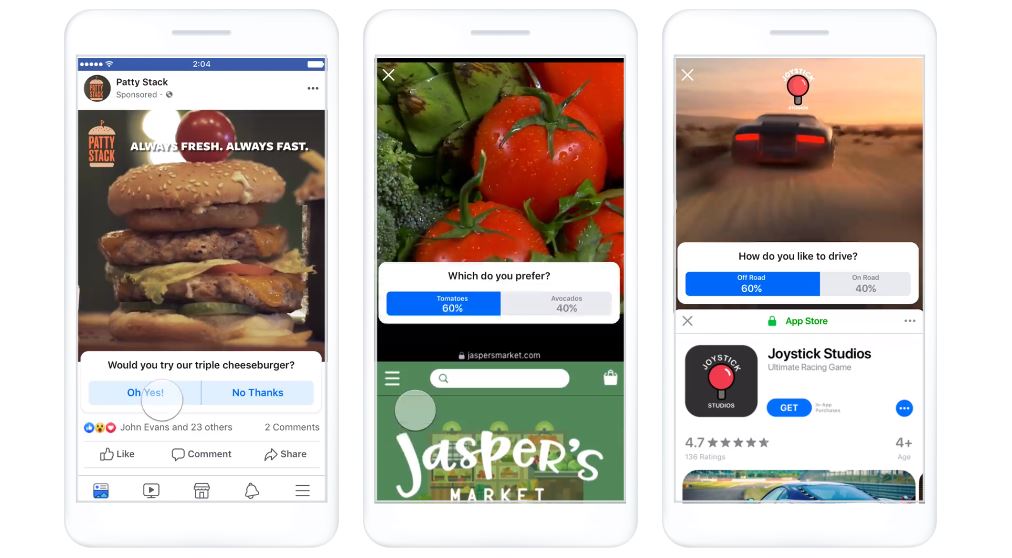 Using social for good, startup Digi-Prex is capitalizing on the popularity of Whatsapp in India. The company, which raised $5.5 million in funding, does not market directly to consumers. Instead, they partner with doctors and pharmacies to deliver medicines to patients living in remote areas. More than 400 million people in India use Whatsapp. Thus, Digi-Prex is only one of many businesses seeking to integrate it into their operation.

The prospect of success on Twitter brings with it the risk of vitriol and conflict. Any post on any subject can summon comments ranging from light disagreement to open hostility. Previously, tweet authors could only mute comments by keyword or user name. In a new controversial update, authors may now hide comments in line. Though, those comments will not be completely invisible. Tweet viewers will still see an icon noting a hidden comment, giving them the option to dive deeper at their own risk.

It’s a simple formula: the more media platforms know about you, the more specifically they can target you, and thus, the higher price they can charge for advertising inventory. Cable companies, the FCC, and Nielsen have been stuck in a quagmire over who can track and report viewer statistics. Meanwhile, account-based digital streaming services have flown by at warp speed. How much are Google, Facebook, Roku and others learning about your viewing habits? Get ready for the uncanny valley of streaming advertising.

You remember Automattic, right? They’re the ones that bought Tumblr for less than $3 million just a few weeks ago. For a company that owes it’s success to a DIY blogging platform, they’re punching well above their weight. This week, Salesforce invested $300 million, ten times what was paid for Tumblr, and more than double Automattic’s last funding round in 2014. The company states that they don’t plan to change their road map. Rather, they’ll be compressing their existing growth timeline from ten years to five.

Unless you’ve been under a rock these last weeks, you’ve seen that the U.S. media is putting the spotlight on vaping companies that market to children. It makes sense – stop telling kids that buying products that are doing bodily harm is synonymous with being a cool adult. So, why not apply the same model to unreasonable body expectations?

Instagram is putting a good foot forward, and will limit which audiences can see posts that promote weight loss products and cosmetic procedures. The hope is this will help push back against the number of young people with eating disorders, social anxiety, and depression. In other news, we do hope a certain detox product has paid a certain influencer more than the cost of her cosmetic surgeries several times over.

Facebook has proven that it can never please everyone when it comes to content moderation. As a result, the social platform has announced a new democratic measure: an Oversight Board. The new committee will serve, literally, as judges over what can and cannot be allowed on the world’s largest social media platform. Consequently, the world will have its first social media judicial body.

… and Silicon Valley is nervous. Years from now, we’ll look back at our present-day wild west of completely unregulated consumer data-mining with awe. California passed multiple new privacy laws that focus on consumer protection, effectively calling the cops on tech’s ‘ask forgiveness not permission’ party. Like GDPR, the laws will force companies to reveal what they’re collecting, how they’re collecting it, and how they’re storing that data. Most of all, they’ll have to delete it at users’ request.

Companies often play the martyr in these cases. After all, protecting user privacy is key in maintaining user trust, and companies should be left alone to profit from what they know about us. Trouble is, consumers have an increasingly sharp awareness that their data is a commodity to any media company. Further, it doesn’t matter what a media company’s intent is when an outside party breaches their data stores. Get ready for a new era of tracking transparency.